Hometown Insurance and Real Estate  was opened by Jeff O'Kane in May of 1994. Not long after the opening of the agency, Cheryl Stotler was hired as our customer service representative. Hometown Insurance and Real Estate operates as an independent insurance agency representing insurance companies personally selected by Jeff to best meet the coverage needs and service needs of his clientele. 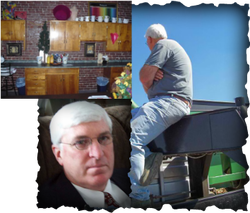 Jeff O'Kane is an agent for Hometown Insurance and Real Estate. He is also the licensed broker, and owner. In addition to his insurance license, he  also is a licensed Real Estate agent  and Appraiser.  Jeff is a near lifetime resident of Peoria County. He was educated in the Dunlap School system and grew up on a farm midway between Dunlap and Princeville. He is married, a father and a grandfather. Jeff is engaged in a farming operation that began with his father, and now includes the two youngest of his sons.  Jeff is a primary in the ArtIsIn Studio and the Polar Bear Ice Cream shop in Princeville, Illinois.  Jeff is a past state president of the Illinois JayCees, and a past Vice-President of the US JayCees. Prior to opening Hometown Insurance and Real Estate, Jeff worked as an agent for two of his now competitors. With his more than 27 years of experience in the insurance industry, Jeff brings an expertise to his position and to the community. 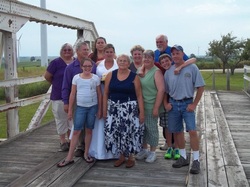 Cheryl Stotler pictured back left with her family
Soon after the opening of Hometown Insurance and Real Estate, we were told by a mutual friend about someone we should consider hiring. We'll never be able to thank him enough for his recommendation of Cheryl Stotler to our agency. Cheryl grew up just north of here, oldest daughter of a hard working bunch of folks. She brings  her talents, abilities and loyalty not just to the agency but to all her customers, too. When looking for a photo of Cheryl to put on the website, it just seemed more natural to place a picture like this. You can see by her warm smile that she is all about her family. This photo doesn't quite include them all, but, it gives you an idea of what makes her happy.